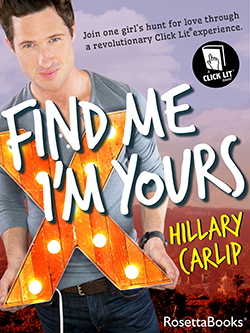 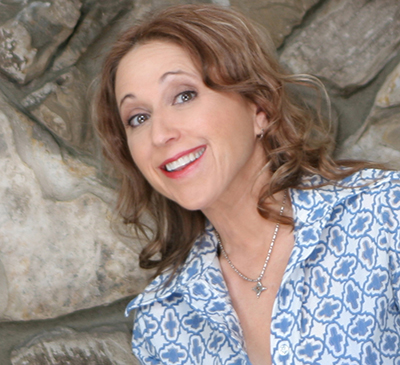 Hillary Carlip is an award-winning, best-selling author of five books, a noted visual artist, and has been creating content, websites, and news in the digital space since 1999.

Her latest project, Find Me I’m Yours (RosettaBooks), is a revolutionary, multi-platform entertainment experience that starts with an eBook novel (which she wrote), and expands into an entire "storyverse" filled with interactive content including original rom-com style videos, 33 unique, custom websites (which she designed and created), many of which feature web series written by and starring A-list talent – and countless ways for readers to share their own content, connect, and personally engage with the narrative.

A game changer in the way stories are told and experienced, Find Me I’m Yours was conceived, written and designed by Hillary, and co-created, directed, and produced by her partner, Golden Globe-winning and Emmy-nominated TV comedy writer/producer/director Maxine Lapiduss. This Click Lit® eBook is the premiere project from Hillary and Maxine’s company, Storyverse Studios.

Her memoir, Queen of the Oddballs: And Other True Stories from a Life Unaccording to Plan (HarperCollins), is an American Bookseller's Association Book Sense Pick Best Seller, a Lambda Literary Award finalist in two categories (humor and memoir), and was selected by Borders as one of the Best Literary Memoirs of 2006.

Hillary forged the way in bringing the voices of teenage girls into the mainstream with her first book Girl Power: Young Women Speak Out (Warner Books). She was honored by the New York Public Library when Girl Power was selected for its prestigious "Best Books for Teens" list. When Hillary appeared on Oprah, the hour show was devoted to the book.

Hillary's second book, Zine Scene (Girl Press), which she designed herself and co-wrote with the renowned author Francesca Lia Block, won an American Library Association Award, and was included in a show at the New Museum for Contemporary Art in New York City.

As a visual artist, Hillary’s work has been sold at prominent galleries in LA, NY, and Chicago, and shown alongside Andy Warhol and Damien Hirst in a five-city museum exhibit during 2014 entitled Stocked: Contemporary Art from the Grocery Aisles. She also has pieces included in the permanent collection at the Ulrich Museum of Art in Wichita, KS.

A web pioneer, Hillary co-founded VOXXY.com in 1999, one of the earliest and most acclaimed networks featuring interactive content with A-List talent. For two years Hillary oversaw all creative aspects including designing and producing their multiple websites, which earned the 2000 Bandie Broadband Award for innovation in the category "Newest New Thing."

The Wall Street Journal has called Hillary and her work "Humorous, touching and insightful;" Chicago Tribune: "Gloriously idiosyncratic." The New York Times declared, "Ms. Carlip's curriculum vitae reads like a CliffsNotes version of American Popular culture,” and the New York Daily News said, "Carlip is 10,000 miles ahead of every other writer: She's a visionary." 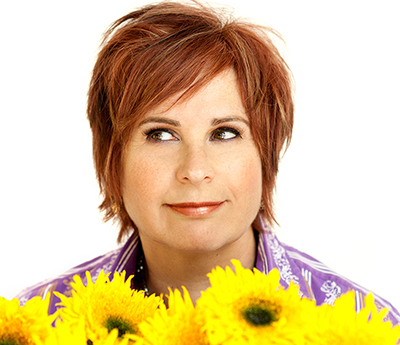 Maxine Lapiduss is a Golden Globe-winning, four-time Emmy nominated comedy writer, producer, and director who has worked on some of the most popular sitcoms of all time (Roseanne, Ellen, Dharma & Greg, Home Improvement, and Disney Channel’s Jessie). She is the co-founder and CEO of Storyverse Studios, which develops and produces story-driven properties within an immersive, multi-platform universe of entertainment. In her role as CEO, Maxine is creating innovative business strategies for collaborations with talent, brands, distributors, publishers, networks, studios, and production companies. She is also writing, producing, and directing multiple original web series for the FIND ME I’M YOURS storyverse, as well as directing sitcoms and selling pilots, TV movies, and series for networks and cable.

Maxine’s past experience includes heading her own successful consulting company, Lapiduss Creative, which specialized in devising creative strategies for businesses and business strategies for creatives; executive producing sitcoms in Russia for Sony International TV; raising millions for entertainment ventures from investors and brands; and starting a successful non-profit for film production in Pittsburgh (Steeltown Entertainment).

As a strategist, entrepreneur, and writer, Maxine has forged new roads in web and content development since 1999.